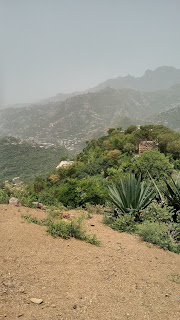 Truthfully, when we put this blog together I didn't think there would be so many posts devoted to beauty, either natural or human-made, but I LOVE THEM.  It's such a welcome reminder that in the midst of all the challenges that Yemen is facing there is still beauty to be found, and that Yemenis…
1 comment
Read more 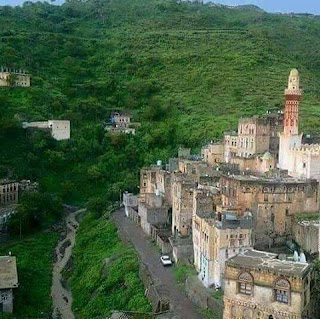 Mohammed Hojily was kind enough to share a few Tweets with me, which I'm going to include here on the blog in the new couple days.  You can follow him on Twitter at: @MohammedHojily.


"Unlike the Arabic peninsula #Yemen has diversity's environmental and cultural, where that beside the green heavens there are huge mountains contains villagers houses on clouds, despite the ravages of war that Yemen is passing through.  But it is still the wondrous land."


I'm so happy that Mohammed kindly shared his Tweets, but also that he shared these beautiful pictures and words. In the popular imagination Yemen is sometimes unfairly reduced to a rugged desert, but it is so much more than that.  One of our main goals with this blog is to change people's default perception of Yemen. 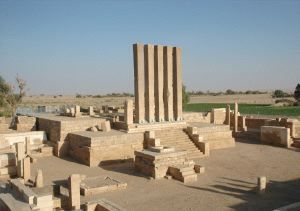 
"Barran Temple is a Sabaean temple near Ma'rib, Yemen; also known as the "Throne of Bilqis", the queen of Shiba whose story with the prophet Solomon is mentioned in the Bible and the Holly Qur'an.
The temple is located to the west of Awwam Temple, dedicated to the God Almaqah. The main features of the structure are the six columns and the sacred well in the middle of the courtyard.
It was partly excavated by Wendell Phillips' expedition of 1951-2.
To make it clear, Yemen is one of oldest centers of civilization in the Near East. Its relatively fertile land and adequate rainfall in a moister climate helped sustain a stable population, a feature recognized by the ancient Greek geographer Ptolemy, who described Yemen as Eudaimon Arabia (better known in its Latin translation, Arabia Felix) meaning Fortunate Arabia or Happy Arabia. Between the eighth century BCE and the…
Post a Comment
Read more 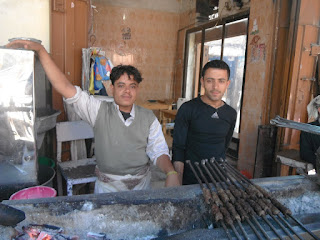 Even though this blog isn't about me - and even though I was only there over a weekend - I have my own memories of Yemen, and I'll share them occasionally.  And although you probably came here via Twitter, there's a chance that you didn't, so I'll give you my Twitter handle: @scuddertravel


"Here are a couple pictures that I snapped on my very brief visit to Sana'a several years ago.  I was wandering around the Old City (and when you're talking about Yemen Old City really means OLD CITY) of Sana'a and it was time for lunch.  It was Friday afternoon and the city was just starting to get busy after the Jumu'ah prayer. As I walked past a little restaurant on a square two gentlemen told me me that their place was the best and that's all the convincing I needed.  I've spent a couple years over seas and I can't imagine I ever had a meal that I enjoyed more or that I remember more fondly." 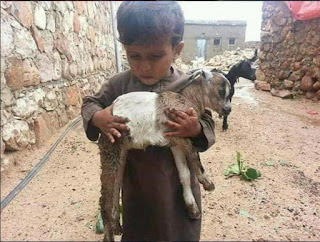 Mohammed Hojily was kind enough to share a few Tweets with me, which I'm going to include here on the blog in the new couple days.  You can follow him on Twitter at: @MohammedHojily.


"A child from Socotra was trying to survive a small goat from the #Mukono Cyclone.  #Yemen."


What strikes me about this Tweet is that it perfectly captures something that anyone who has ever traveled to Yemen learns: the incredible kindness of the Yemeni people.  Even when faced with natural disasters (but also sadly man-made disasters) that kindness is never shaken. 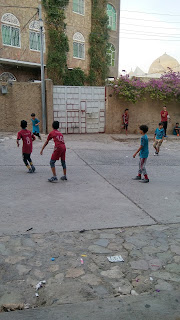 This story was sent along by Mohammed Alzaeem, our most active contributor to our Yemen Stories blog.  You can follow him on Twitter at @mohammedalzaee1.


Children playing football in the street - Taiz, Yemen
The children in my neighborhood turn the street into a playground to play football. Two teams of children are throwing the ball. On the sidewalk stands the referee with his whistle in his hand.
One of the attendees tells me that this match is being held within the Ramadan Football Competition, which is organized by a group of young people in the city. The teams of Taiz's neighborhoods compete for the title. Because they do not have a playground, they have made some streets in various neighborhoods playgrounds.
It is the insistence on life in the face of death in a war-torn country. All they dream about is to live their lives in dignity, peace and harmony. The picture is an example of the triumph of life over death, love over hatred and peace over war.

April 25, 2018
Here's a submission from Amjad Al-Khattabi, who can be followed on Twitter at @Amjad_khatabi.
"I just wanted to show this video. Anas appears training on his new artificial hand on 1:10 https://m.facebook.com/story.php?story_fbid=232587387495314&id=208858436534876 … We have started an initiative aimed to distribute free prosthetics for those who are in need. We named it Enable Yemen because we want it to be a verified member of the international e-nable bases in the US ( link: http://enablingthefuture.org ) . Until now enable has approved two of our submissions first for 3d printing quality and the second for assembly."
While the point of this blog is not to focus on the war, the chaos and destruction caused by it is sadly an undeniable part of the everyday lives of Yemenis.  Amjad's post, and the video, speaks to the incredible spirit of Yemen in the face of almost unimaginable heartbreak and devastation.

Greetings. My name is Gary Scudder and I'm a Professor at Champlain College in Burlington, Vermont in the US. However, this blog is not about me. I'm hoping that this blog can serve to present a more balanced portrait of Yemen, a country that is routinely ignored or demonized in the western press. My goal is for Yemenis to contribute pictures and short commentary about everyday life in Yemen. The photographs do not have to be professional quality. What matters is the story and the power of story telling. The photograph could be the view out of your window - or taken at your sister's wedding - or of the store where you shop - or your favorite restaurant - or your favorite Yemeni dish - or anything that expresses what it means to live in Yemen. While not ignoring the problems that Yemenis face, the goal of the blog is to provide a view of the day to day life of Yemenis; politics plays a role in that life, and thus it will be part of the story, but my goal is not to side with north or south or any religious viewpoint, but rather to open a window and provide a glimpse into a beautiful country populated by extraordinary people. If anyone would like to contribute - or if you have any questions or comments or suggestions - please send me an email at scudder@champlain.edu or contact me via Twitter at @scuddertravel.
Thanks,
GS